skip to main | skip to sidebar

David Icke: Was He Right?

Here's a link to an interesting British documentary on controversial writer David Icke called "David Icke: Was He Right." I found it on YouTube, which has all five segments of the documentary.
Posted by Gordon Cole at 10:34 AM No comments:

This situation involving the Trans-Texas Corridor is getting out of control. Reports ranging from World Net Daily to Sal Costello's investigative blog (salcostello.blogspot.com) to Alex Jones' radio show and website (prisonplanet.com) are reporting on this issue. I discovered one of the newspapers that is being bought by the Australian conglomerate is my first paper, the Waxahachie Daily Light, which is in Waxahachie, Texas just south of Dallas.

So ... I called my old editor, Neal White, down at the WDL and he told me that while he wasn't familiar with all the details, he wasn't being told to change the Daily Light's stance on the TTC, which is largely critical of the plan. Well, that's good but things could change quickly.

My good buddy Joey Dauben, over at the Ellis County Observer, has a report on this as well. Keep the pressure on 'em, gang!
Posted by Gordon Cole at 10:10 AM No comments: 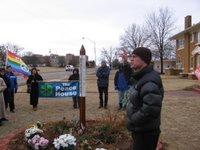 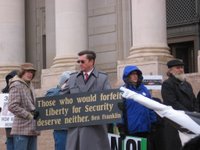 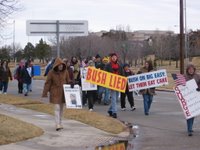 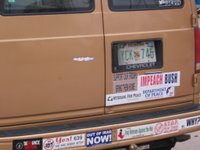 At Saturday's anti-war protest at the State Capitol in Oklahoma City, I had a chance to approach State Sen. Andrew Rice (speaking by the Peace Pole at upper left in dark coat and hat) who lost a brother on 9/11 at the World Trade Center.

I had heard a lot about Sen. Rice and that he was a new progressive representing a district in Oklahoma City. Of course when I heard about his connection to 9/11 via the tragic death of his brother David, I had to ask him about whether or not he felt 9/11 could've been an "inside job." Well, after he finished speaking about Saudi oil money funding the terrorists who perpetrated the attacks and how this is linked to oil interests in America, the crowd continued its march down Lincoln Blvd. south of the State Capitol.

But I shook Sen. Rice's hand and asked him directly if it was an "inside job." He said he wasn't sure about that but that more needed to be investigated and that "the truth would eventually come to light." Then, a man named Porter who had spoken earlier on the Capitol steps and had taken a libertarian stance on issues, questioned Rice as well, asking about an "inside job" and issues related to World Trade Center 7. I asked him if he knew of former WTC janitor William Rodriguez and his report of bombs going off below him in the basement. Rice seemed interested in this information and acknowledged it was all very strange and 9/11 required further investigation. I know if I had lost a family member that day, under suspicious circumstances, I would be asking all sorts of questions. Anyone thinking it was simply "terr'ists with boxcutters" is living in a dreamworld.

That was pretty much it. Porter and I continued walking back to the Capitol and I told him how I pretty much knew intuitively on 9/11/01 that the government had been involved in the attacks. We talked about Alex Jones and the truth movement, including Matthew Woodson, the young man who ran for congress from Oklahoma City. It was good to meet a likeminded soul who was more vocal about his questions regarding 9/11. As for Sen. Andrew Rice, well, he's new and I think if he were given the right information I think he'd come to our side.
Posted by Gordon Cole at 2:30 PM No comments:

A new 'Sheriff' in town

As usual, muckraking DC journo Wayne Madsen is on top of his reporting game again today with information on a new military weapon (DARPA, Raytheon, usual suspects) that uses a high-powered microwave energy beam, aka "Sheriff," which can be used to scare and burn rioters. A demonstration of the "Sheriff" weapon, reports Madsen, was given at Moody Air Force Base in Georgia.

Writes Madsen: Using enlisted airman, acting as "rioters," as "guinea pigs," a beam was directed at them from a parabolic antenna located 500 yards away atop a Humvee. The wave heated the skin of the "rioters" to 130 degrees, creating the feeling in the targets that they were being burned alive, scattering them in the process.

Madsen continues to note that this weapon was demonstrated for journalists in advance of the major anti-war march planned for this weekend in Washington and cities like here in Oklahoma City. Of course Alex Jones (who had a great interview with director David Lynch on his show today) noted these energy beam, crowd-dispersal weapons in 2004 when he attended the Republican National Convention in New York City.

Yes, there will be government operatives in all these cities, and in some cases they may try to rile people up in order to give itchy-trigger-fingered cops a reason to test out their new toys. I remember when I marched in New Orleans in late '02, prior to the start of the illegal Iraq war, me and everyone participating in the march had their photo taken by men who were clearly cops/agents of some sort.

And now it appears we have a new "Sheriff" in town. More can be read about this supposed "nonlethal weapon" (yeah, right, like the Taser, huh?) in this 2004 story in the Boston Business Journal.
Posted by Gordon Cole at 12:36 PM No comments:

Is the 'surge' an attempt to obfuscate plans to attack Iran?

Writes Roberts: "Bush's entire "war on terror" is based on lies. The Bush Regime, desperate to keep its lies covered up, is now trying to prevent American law firms from defending the Guantanamo detainees. The Bush Regime is fearful that Americans will learn that the detainees are not terrorists but props in the regime's orchestrated "terror war."

And hearing monotone, lifeless Sen. John McCain tell Tim Russert on "Meet the Press" that a "surge" is needed, yet nothing about our plans to attack Iran ... it's insane!! An attack on Iran would kick off a horrible global war, make no mistake. And what of China and Russia? Will they see that as an opportunity to attack us? China and Russia cannot be trusted.

These are indeed troubling times. I wish there were more people speaking out against the crimes of this administration. The Democrats certainly aren't doing enough. And Hillary Clinton, who is she putting first? Certainly not the American people.

Pray that there isn't some phony "attack" here at home or overseas that kicks off an attack.

Stay tuned.
Posted by Gordon Cole at 10:03 AM No comments:

It simply sickens me to think that the dunce-in-chief and his henchmen are seriously considering a "surge" over in the ruined country of Iraq. A surge of violence and misery? I mean what is this supposed to accomplish? Why aren't there demonstrations from coast-to-coast demanding an end to this illegal war and a call for the impeachment of BushCo. I feel like I'm in Bizarroworld where up is down and so on. No clear-thinking person can possibly think that a "surge" is a good idea. Didn't Washington learn anything from the November elections?
Posted by Gordon Cole at 10:33 AM No comments: